Aphids, also known as plant lice, ant cow or greenfly, are soft-bodied insects that feed on plant juices. Most species of aphids have tubelike projections called cornicles on their abdomen. Aphids are extremely destructive because they can transmit virus diseases between plants and stunt plant growth.

Some species of aphid feed on roots and stems. Heavily infested plants will show various signs of damage such as curled leaves, stunted growth, or low yields. Some plant species contain certain chemicals that repel aphids. Older plant tissues can also develop resistance to these pests.

Stem mothers or wingless females reproduce throughout the summer without mating. This process is called parthenogenesis. Instead of producing eggs, these wingless females produce living young.

The host plants eventually become overcrowded. When this happens, some offspring will grow a pair of wings. Winged adults will transfer to a secondary host and start a new colony there.

Some aphids reproduce by mating, while others reproduce asexually. Aphids that produce eggs have a holocyclic life cycle. The aphid begins as an egg that was deposited before winter. It will then hatch into a fundatrix or a wingless female. The fundatrix will produce a female clone, which will then produce both males and females in late summer. They will mate and the female will lay eggs that can survive the winter.

Aphids with an anholocyclic cycle produce a live birth clone of themselves. The female aphid, which may or may not have wings, produces a clone known as an Aptera. The clone is wingless and capable of surviving the winter. The Aptera creates a new generation by producing more clones.

These pests have natural enemies, and you can use these predators to control their population. Some of these predators include ladybird beetles and lacewing larvae. When you are dealing with large populations of aphids, you can control them with horticultural oils or insecticidal soaps. 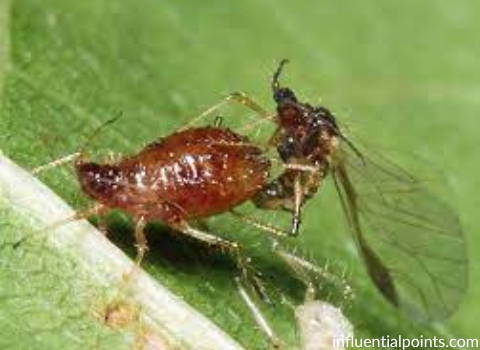 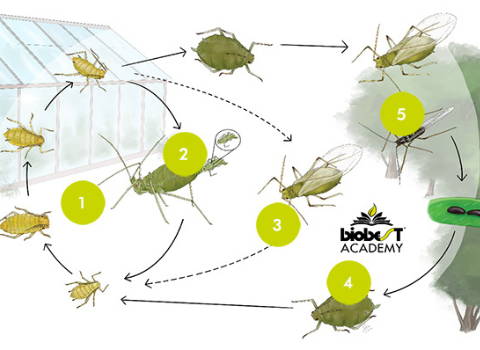 Around 250 species of aphids are extremely destructive to ornamental plants and crops. Here are some of them.

One of the most common species is the cabbage aphid, which is gray-green and often found in large groups on the underside of leaves of cauliflower, cabbage, radishes, and Brussels sprouts. Cabbage aphids overwinter as black eggs in the northern region. They can be controlled with insecticides.

Another destructive species is the spinach aphid or green peach aphid. It has a pale yellow-green body with 3 dark stripes on the back. The females produce sexual females and males in autumn. They can also produce parthenogenetically in summer. Spinach aphids are serious pests as they transmit various plant mosaic diseases.

The cotton aphid aphis gossypii can produce live young in warm climates and eggs in cooler areas. They may feed on melon, cucumber, and cotton. You can control them with predators and parasites.

The greenbug is another destructive species of aphids because it can wipe out your entire garden. It feeds on small grains such as wheat and oats. The greenbug appears as yellow patches on the infested plant.

Each female greenbug can produce 50 to 60 offspring per generation. They can produce around 20 generations every year. Greenbugs can be controlled by insecticides and parasites.

The pea aphid is also a common species of aphids. It appears in two colours – pinkish-red and pale green. The pea aphid overwinters on alfalfa and clovers. They will then migrate to peas, their primary host, during spring.

Pea aphids transmit viruses that kill pea plants. Female pea aphids can produce between 50 and 100 offspring every year and up to 20 generations annually. Pea aphids can be controlled by weather conditions and insecticides. They are susceptible to parasites and natural predators like ladybugs.

Potato aphids overwinter as black eggs on roses. The eggs hatch into green and pink nymphs that eat the plant’s leaves and rosebuds. They feed on potatoes in early spring. One generation is produced every 2 to 3 weeks. Potato aphids transmit potato and tomato mosaic viruses that kill flowers and vines.

Rose aphids have a green body with pink markings and black appendages. They feed on cultivated roses. Natural predators include aphidlions and ladybird larvae.

Rosy apple aphids feed on apple trees, but they can also attack plantain plants. Their feeding habits cause leaves and fruits to deform. Rosy apple aphids also feed on mountain ash, pear, and hawthorn. They can be controlled by parasitic wasps, lady beetles, syrphid flies, lacewings, and other natural predators. You can also use insecticides if you are dealing with large infestations.

Woolly apple aphids may kill or stunt apple trees. You can control their population with parasites.

How to Control and Prevent Aphids

There are various ways to control and prevent aphids. One of these is by spraying infested plants with a strong stream of water from a hose to dislodge the aphids. If you are dealing with a large infestation, you can dust your plants with flour. Horticultural oils, neem oil and insecticidal soaps can also kill aphids.

You can make your aphid spray as well. Simply mix a few drops of mild dish soap and water and then transfer the solution into a spray bottle. Spray the plants with this solution every two to three days for two weeks. You can also add cayenne pepper to this solution to make it more effective against aphids.

Some products that we recommend for you to use when dealing with aphids are Botanical Green House Vegetables BUG KILLER 950ml, Green Earth Insecticidal Soap RTU 1L, and Safers End-All II 1 L RTU C7.