The gypsy moth, Lymantria Dispar Dispar or simply with the acronym LDD moth, is an invasive species native to Europe. It was in 1969 when it was first detected in Ontario. LDD moths are known as defoliators and feed on various hardwood species like aspen, birch, and oak trees. 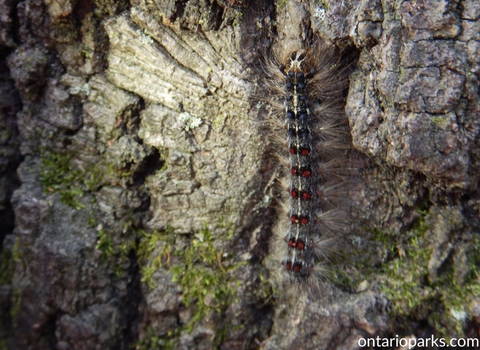 Softwood tree species like Colorado blue spruce, eastern white pine, and balsam fir can also be affected during severe outbreaks. These LDD moth outbreak levels are cyclical and typically occur every 7 to 10 years. The outbreak years usually last for about 3 to 5 years. Branch and twig dieback may start to occur to healthy trees after years of defoliation.

LDD moth caterpillars play a significant role in the widespread outbreak as they are chewing through trees and shrubs across Southern Ontario. Experts even say that there could be another record damage year for gypsy moth infestations.

According to an entomology technician from the Invasive Species Centre, a conservation organization that prevents, detects, responds to, and controls invasive species in Canada, 2020 was the year with the most significant LDD moth outbreak in the history of Ontario. It was even expected that it might do the same damage in 2021 or even more than what happened the previous year.

With regards to the current outbreak, most of the LDD moth population explosion is found in Southern Ontario. However, Quebec also reports that there are outbreaks in the Montérégie region, near Montreal specifically Boucherville, L'Île-Perrot, parc national du Mont-Saint-Bruno and in the Outaouais region, while smaller LDD moth populations are near Quebec City and in the Mauricie Region.

Data from the Ontario Ministry of Natural Resources and Forestry or MNRF says that in 2020 there were about 569, 000 hectares of tree defoliation. Tens of thousands of trees are covered with gypsy moths in what is considered the largest forested area in the west of London, Ontario.

Last year, it is the second year that the 500 hectares or 1,235 acres of Mosa or Skunk’s Misery Forest was damaged by an LDD moth infestation. It is a Carolinian forest where endangered species of wildlife and floral are found.

Effects of Gypsy Moths on Forests

LDD moths can ruin forests. Some of the effects that they do to forests are the following: 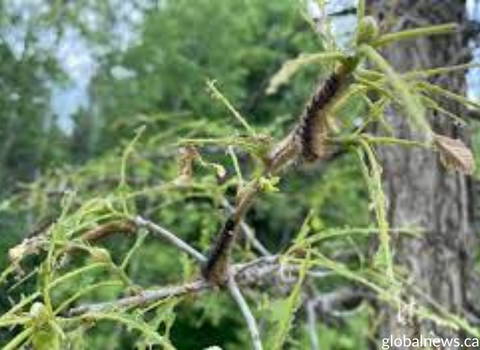 Without controlling the LDD moth infestation, it can cause severe defoliation and some trees may even end up getting completely defoliated. This is the reason infestations must be addressed early on before it gets worst. Also, preventive measures are needed to prevent an LDD moth infestation from repeating.

Identifying Gypsy Moths and Where They Live

Gypsy moth caterpillars are known for their distinctive six pairs of red dots and five pairs of blue dots, and they are covered in tiny hairs. The tiny hairs on their legs can cause an allergic reaction to some people. These caterpillars grow up to about 6 centimetres in length.

Adult male moths are dark coloured and fly around while adult female moths are white, larger, and cannot fly. They are found throughout Southern Canada.

Egg masses are seen on the bark of trees during winter as these are where the LDD moth eggs live during the cold season. As spring and early summer come, larvae will eat on foliage as they start climbing the trees.

Just like other successful invasive species, a gypsy moth caterpillar is an expert in transporting to new feeding areas. One specific way that these caterpillars do this is by “ballooning” or by hanging off the ends of branches on tiny threads. This allows them to be carried by the wind to new areas. Sometimes they use ground transportation.

Egg masses are the trick, they usually leave them on the trees and at times leave them on patio furniture pieces. Sometimes, they are under the car bumper. Whether they use ballooning or ground transportation, they move pretty easily, which allows them to spread to more locations in a brief time.

Summer may be the best time for people to go outside and enjoy nature, but it is also the arrival of caterpillars. This is the reason many are worried about dealing with infestations as early as possible. 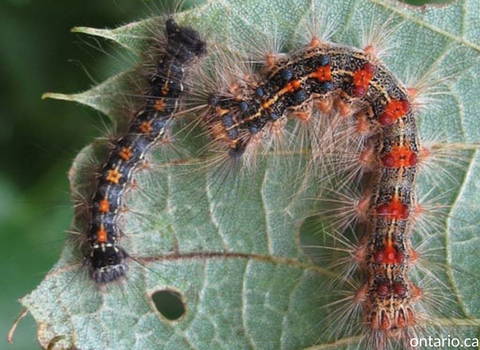 This year’s outbreak is not yet predicted by experts but as what is expected by experts from the previous year, forest areas were damaged because of the gypsy moth infestations.

These egg masses are the trick. They leave those on trees, but they also leave them on sometimes patio furniture sometimes under the bumper of a car and so it is pretty easy for them to move around.

The sight of gypsy moth caterpillars is creepy and the real problem behind the presence of these invasive species is that they eat a lot. These hungry caterpillars take out huge areas of bushes and trees.

Back in 2020, the area of trees that were damaged and lost their leaves in Ontario alone was almost the size of Prince Edward Island. They do a certain amount of damage, and their population is almost the same or higher than last year.

Though MNRF is gathering data about the infestation, they do not manage the gypsy moth infestation on private lands.

In spring, once the eggs have hatched, you can place burlap bands around tree stems or tree trunks that will provide travelling larvae with a specific place where they can flock during warm days. This also allows landowners to remove and kill them physically.

Another option is wrapping the trees with sticky substances such as duct tape and other alternatives to trap caterpillars.

The use of registered insecticides is also recommended to protect the trees from complete defoliation once the larvae emerged.

Another way to control the infestation in winter and fall is by physical removal of egg masses. During the drought season of the year, you can help the trees by watering them into the fall season when you see it appropriate.

Manage Trees for a Healthy Forest

For a woodlot setting, it is recommended that trees are managed by allowing proper spacing and all areas are provided with enough light to ensure a healthy forest. It is recommended that diverse tree species resilient to diseases and insect disturbances are planted in the forest.

In a woodlot setting, manage trees to allow proper spacing and light to promote a healthy forest. Plant a diversity of species for a forest that is more resilient to insect and disease disturbances. 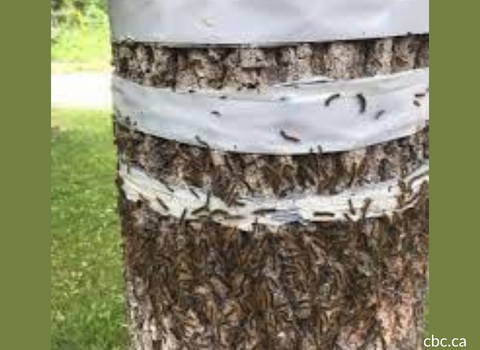 Products that we recommend that can also help in controlling gypsy moths in your property are the following: