The Japanese Beetle Popillia japonica (order Coleoptera) is a green beetle that is native to Asia and is a highly destructive invasive insect in North America. It was believed that the first Japanese beetle infestation started when shipments of iris plants coming from Japan to North America. Since then, the Japanese beetle has established itself as one of the most devastating insect pests for agriculture and horticulture and a regulated pest throughout Canada. The beetle feeds on more than 300 different types of plants including fruits, vegetables, fruit trees, and flowers. It can attack many agricultural crops including apple trees, soybeans, corn, and tomatoes.

Adult Japanese Beetles are about a half-inch long with metallic green head, thorax, and elytra (wing covers) with coppery brown wing veins that form an "M" shape on their backs. Others say that they look like miniature rhinoceroses. They also have cream-colored undersides. Male Japanese beetles tend to be smaller than female beetles.

Japanese beetles have an elongated snout. They also have a yellowish brown head with large jaws used for chewing. The larvae are white with a brown head and have six legs near the front of their bodies. Their distinctive coloring makes them easy to identify throughout their lifecycle and you must know what they look like before acting against these pests.

Japanese beetles spend most of their lifecycle in turfgrass, laying eggs from early July through August. The best time for applying a Japanese beetle insecticide is right after adults emerge from pupae (from mid-July to early September).

The Japanese beetle larvae are so small that they can easily hide in the grass, making it difficult to identify them. After hatching from eggs laid by adult beetles in turfgrass, Japanese beetle grubs live up to three years before maturing into adults. It is during this time (early July through September) when you should apply an insecticide containing imidacloprid or chlorantraniliprole to prevent them from damaging your lawn. 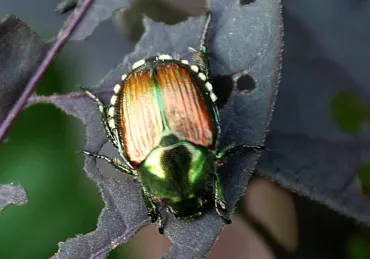 Japanese beetles prefer soil temperatures in the 65 to 85-degree range (Fahrenheit). When these conditions are met, Japanese beetles emerge from their winter hiding spots in early- to mid-summer. The female beetle can begin laying her eggs within 24 hours of emergence and will continue to do so for several weeks until she has laid up to 60 or 70 eggs.

The life cycle of Japanese beetles consists of three stages: egg, larvae, and pupa. The adult female will lay eggs in soil or near the base of plants. A few weeks after hatching from the eggs, small larvae begin to feed on grass roots then transform into pupae where they rest before emerging as adults.

Once they emerge, they will start eating plants and reproducing before dying off after about two months during wintertime.

Japanese beetles moult four times throughout their lifespan with each stage or instar requiring a different amount of time for development depending on environmental conditions. The first two larval stages require about 30 days while the third and fourth stages take around 42 days which is when adults emerge - however these life cycle phases can be much shorter if there has been an infestation in warmer climates.

To reproduce successfully, the male beetles need access to nectar sources for energy while females require pollen because it is an essential source of protein that is needed during oviposition (egg-laying).

Signs of a Japanese Beetle Infestation

Learning about the signs of a Japanese beetle infestation will help you understand when to act fast and control the infestation before it gets worse. The following are the signs that you should take note of: 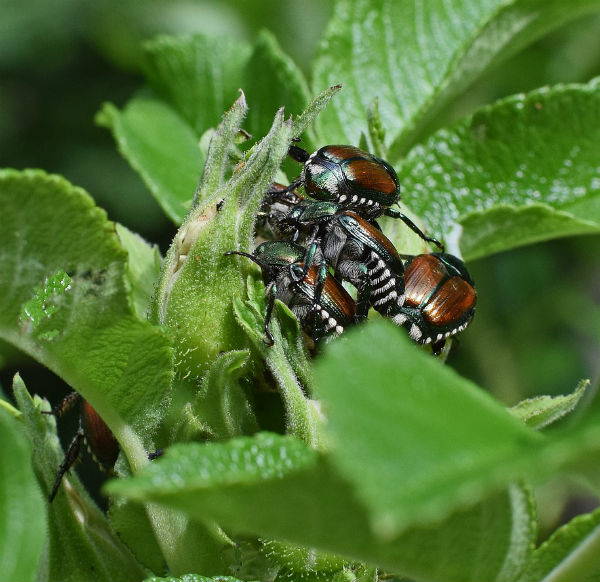 When and Where Does a Japanese Beetle Infestation Start?

A Japanese Beetle Infestation starts when the adult beetles chew on tree leaves or flowers from early summer until late fall, destroying them from the outside edge towards the center of leaf or flower petal until it is completely eaten up by these invasive pests.

The larvae or grubs can damage lawns by feeding on grass roots near the soil surface while adult beetles feed on leaves leaving behind telltale signs of chewed foliage. If left untreated, this type of damage could potentially kill turfgrass. 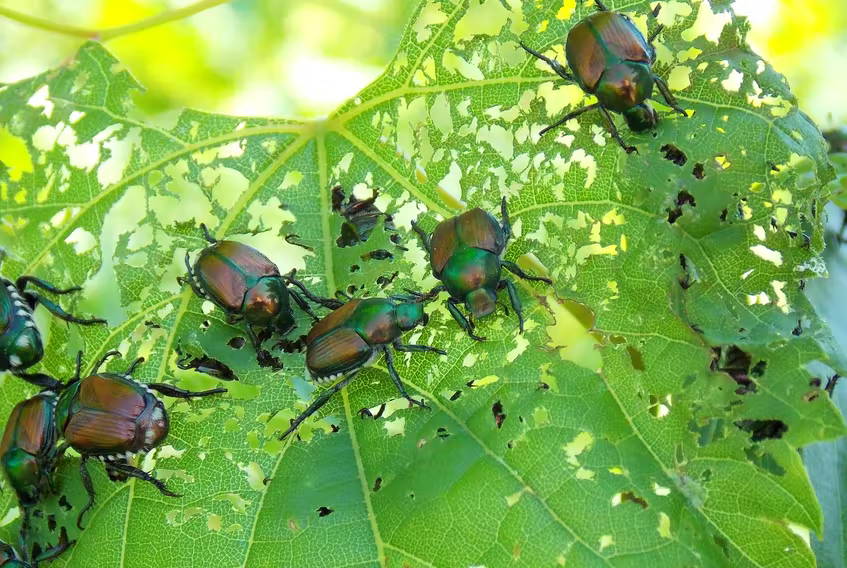 Japanese Beetles can transmit diseases like phytoplasma which causes the disease known as 'sooty blotch' or 'stunting disease'. Soil-borne fungi such as Fusarium spp are also transmitted by Japanese beetles.

These pathogens cause root rot, damping-off, leaf spots, and other serious problems that affect plant's health killing them off altogether. The risk of transmitting these soil-borne diseases increases greatly when larvae feed on roots because it makes it easier for fungi to enter and infect plants.

If you notice that your lawn no longer looks as green and lush as it used to, then there is a good chance that Japanese Beetles are present.

What Month Do Japanese Beetles Go Away?

The Japanese beetle is a common pest found in many parts of the United States and Canada which can cause major damage to plants, shrubs, and trees. If you live outside one of these areas, it might be difficult for you to determine when this bug goes away as they are present all year round.

How To Eradicate Japanese Beetles and Prevent Them from Coming Back

Japanese Beetle infestation is a severe problem in Canada not to mention it can cause considerable damage if left untreated.

To eradicate Japanese Beetle infestations, it is important to determine the extent of the damage. It is recommended to use Integrated Pest Management (IPM) practices which include quick removal; chemical control or soil fumigation, when necessary, with the use of nematodes such as Heterohabditis bacteriophora and Steinernema carpocapsae for effective eradication especially when there has been an infestation.

Insecticides such as carbaryl, permethrin and tralomethrin can be used to kill Japanese beetles on contact.

There are many different chemical treatments that can be used to kill Japanese Beetles; however, these chemicals will also affect other insects such as bees or butterflies so they should only be applied when it is safe for pollinators to be outside.

Beneficial nematodes such as Heterohabditis bacteriophora and Steinernema carpocapsae are a non-toxic biological control option that is effective in eradicating the larvae population. In addition, nematodes also help prevent future infestations by killing newly hatched grubs before they become breeding adults.

Tips to Prevent Them from Coming Back Again

The best way to prevent beetles from returning is proper management practices which include:

Using Japanese beetle traps is one of the best ways to prevent Japanese beetles from coming back. These traps capture and kill adult beetles before they can lay eggs which prevent larvae infestation in plants.

You can use homemade Japanese beetle traps made of cardboard paper cups which you need to fill with a mixture of beer and dish soap. After that, just place the trap near Japanese beetle-infested plants. Japanese beetles are attracted to the smell of beer and will drown in soap which can help reduce Japanese Beetle infestations.

This method is also known as suction trapping. It involves placing a vacuum on top of leaves where adults have landed so that they get sucked up into the machine. While this method can be effective in reducing the number of beetles it is not very efficient when done alone. There are also commercially available Japanese Beetle traps to help reduce infestations.