What Causes Flying Ants in Your House?

What Causes Flying Ants in Your House?

When the warmer starts or during humid times of the day, you might notice flying ants swarming around lights both indoors and outdoors. You might be dealing with an ant infestation now, but to see these ants flying ants swarm should be taken as a sign that the infestation is nothing near its end. 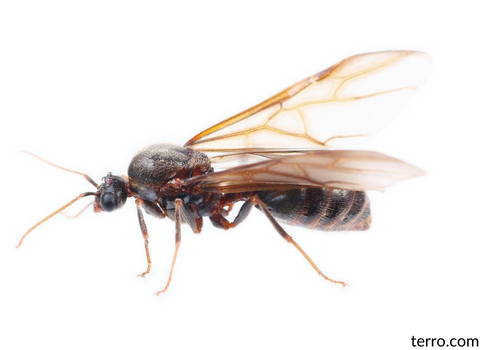 These ants flying around your home are not going out of their colony just for any simple reason, they are out there for one reason. Learning the reason behind the presence of these flying ants will also help you figure out the current level of ant infestation in your home. It will also help you recognize when the situation requires the help of professional pest control.

Why Are There Ants Flying?

It may be the last thing that you want to see around your home, but ants fly. It is common knowledge that there are worker ants and queen ants inside an ant colony. However, you should know that there are also called reproductive ants. These are the only winged ants in the entire colony.

When the conditions become favourable and the colony is set to spread, hundreds of ants start flying together and meeting in huge swarms. These are the only ants that were born to breed.

As these ants meet in the swarm, flying male and female ants will mate and reproduce. It is considered the mating season for all the ants before the queens move and start their new ant nests.

Almost half of the males die immediately after the breeding swarm because they have already fulfilled their purpose in life. On the other hand, females will go back to the ground and consume their own wings to get protein. They will then burrow to the ground, hoping that they can start their new colony and become the queen of a new ant nest.

Without their wings, ants will not be able to get involved in this nuptial flight. Thus, decreasing their chance of breeding and creating their new colony.

With all of these in mind, you should know that these ants are in their mating season the next time you see a swarm. While this is a common sight outdoors, you should be alarmed once you start spotting a swam of these flying insects indoors.

Reasons Why There are Ants Flying in Your Home

If there flying ants in your home and swarms are starting to be seen in some parts indoor, then it is almost certain that there is a large ant colony in your house. The colony may be already so large that they already feel that they are ready to spread to a new nesting site and make new ant nests. 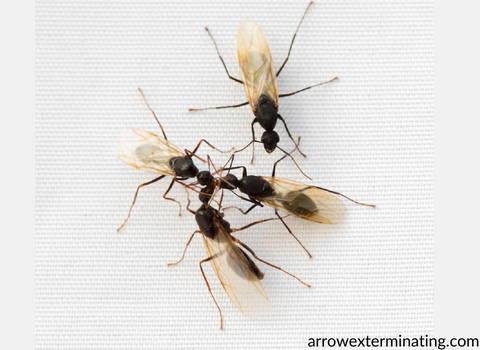 One of the reasons why they got inside your home is that the queen ant got in after their mating season. Since female and male flying ants go their separate ways after breeding, queens travel great distances to find a new place to build their colony.

Flying ants pose a threat to homeowners as they get inside your home and establish their ant colony without your knowledge.

Among the common things that may have attracted flying ants in your home are moist, wood, and light. You might notice these ants around a pool, humidity during late summer, or just swarming after raining.

Moisture attracts ants and they will actively look for a source even inside your home. Some say these ants swarm around lights, though there is no known attraction there.

Termites are also known to have breeding ants that fly and reproduce. However, unlike the flying ants, termites can make more damage to your home. You have to figure out which one you are dealing with to know your pest control options. If you confirm that you also see them inside your home, then you must contact pest control in getting rid of these swarming ants.

Differences of Termites and Flying Carpenter Ants or Other Ant Species

Carpenter ants are the common species often mistaken as termites and vice versa. Some are larger than termites and considered the largest among other ant species. However, there are still small carpenter ants, so size should not be used to determine the species. 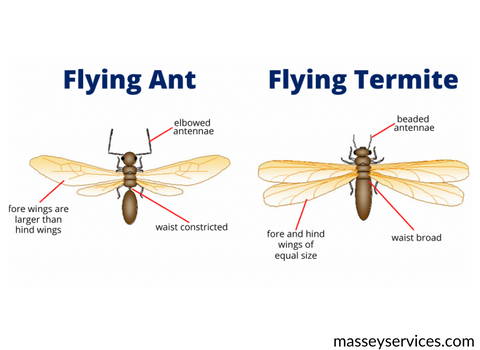 So, to differentiate the two, look for these characteristics:

If you notice these characteristics to the flying insects in your home, then you are dealing with a carpenter ant problem.

Unlike termites, carpenter ants are more likely present outside. Also, termites eat the wood they are tunnelling in while ants only nest in it but do not consume it. Another difference is the frass or soil, wood dust, and insect parts that carpenter ants leave on the openings of the nests. Termites do not leave such on their nest openings. However, both are destructive to homes.

Ways to Getting Rid of Flying Ants in Your Home

Always remember that it is not enough to kill flying ants that you see around since the colony is still in your home or within the proximity of your home. If the colony survives, more flying members will be produced by the next mating season. This season is usually during early summer or spring.

There are some pest control methods that you can try to get rid of flying ants and keep them out of your home. Try doing the ones below:

This may not be as effective as it may seem, but this works great especially when placed inside the nests. You can also use an insecticidal powder that is formulated to kill ants and is best used indoors. Aside from the nest, you can also drill holes where you can inject the powder to kill the flying ants.

With this one, ants pick it up and can be mistaken as food and bring it to their colony. From there, the whole nest will die as other ants will also spread to other parts of the nest. This option is slower acting but is considered safer and easier to use.

Foraging ants will be the ones picking it up and carrying it back to their colony as well as their queen. Since the death of the queen also means the death of the entire colony. Make sure that you read labels before buying to know which product is best used indoors.

Using insecticide sprays can also be effective in killing the whole nest of the flying ants but reaching the nests can be a bit difficult. It is effective only for ants that are out and foraging for food. This can kill ants on contact. Make sure that you read label directions when using insecticides and abide by the law implemented of its use in your area.

When the flying ant infestation is no longer controllable thru the abovementioned methods, you can search for pest control experts to help you in the situation. They will search for the pests and give you recommendations on the best treatment to get rid of the flying ants.

How to Control an Infestation

Since the presence of flying ants can be detrimental to your home and property. The following are ways you can do to control these pests and prevent any damage from getting worse:

Immediately vacuum the swarm of flying ants and remove them from their hiding place.

Make sure that no spaces or gaps are left open where flying ants can access to get inside your home. Seal all cracks that you find in your home. 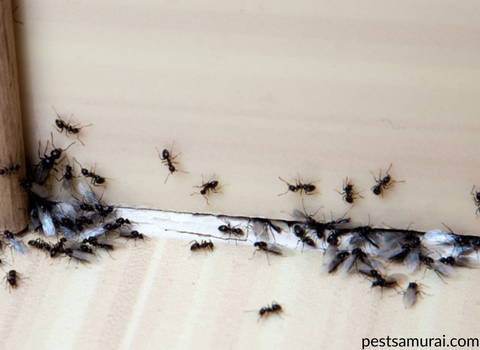 As much as you want your house to be free from any damages, you have to check for possible damaged wood that these flying ants caused. You should fix it to prevent further damage and attract more ants from getting into your home.

Do these things to help in preventing the infestation from getting worse and get rid of flying ants using your chosen treatment methods work against these flying ants.